Project - Bolt Action Germans for Battle of the Bulge

After quite a many months in the making, my Wacht am Rhein German force is shaping up to be in gaming size.

I started the project back when Warlord Games released the first set of German Grenadiers in Winter gear. The models are one of my favourites from the Bolt Action range, Battle of the Bulge is great period of the war for gaming and after all these years of Bolt Action, I did not have a German army in 28mm. What more you need for a hobby project? 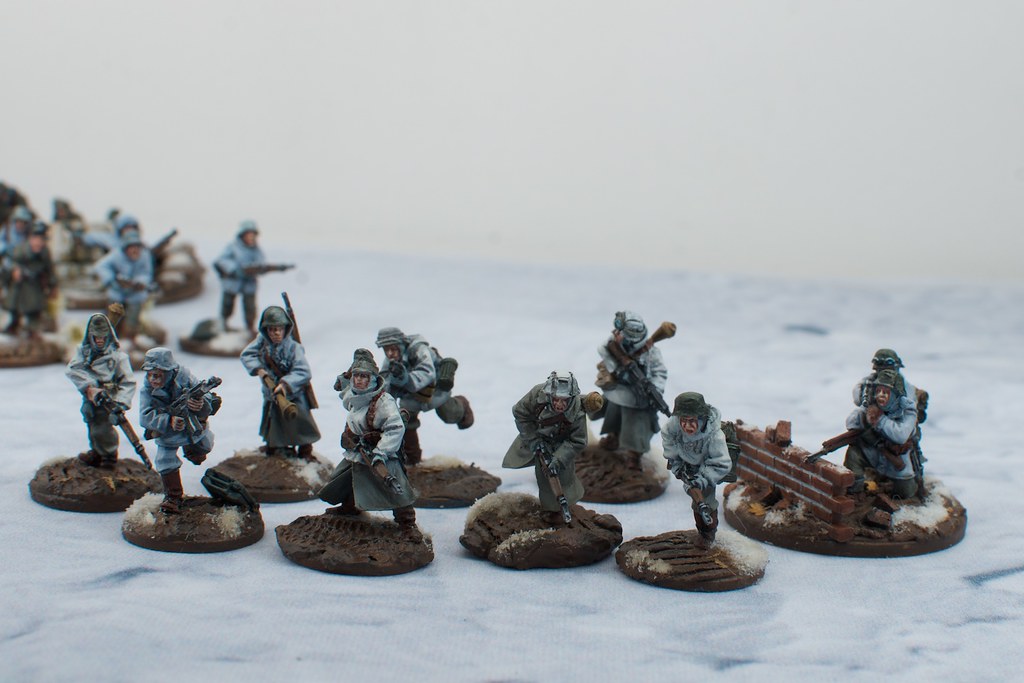 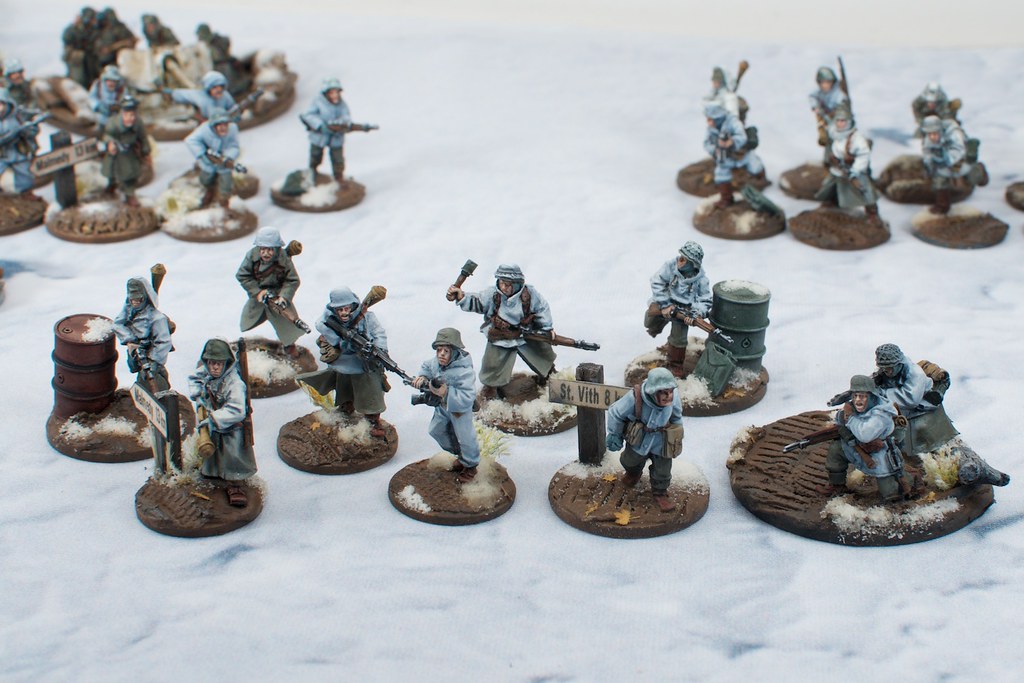 The Warlord metals have 10 distinct sculpts, with most of them coming with separate interchangable heads to give a bit of variation. As I was planning on building four full strength squads, I felt this would be slightly too many duplicate poses so I mixed in winter clad grenadiers from Artizan Designs. 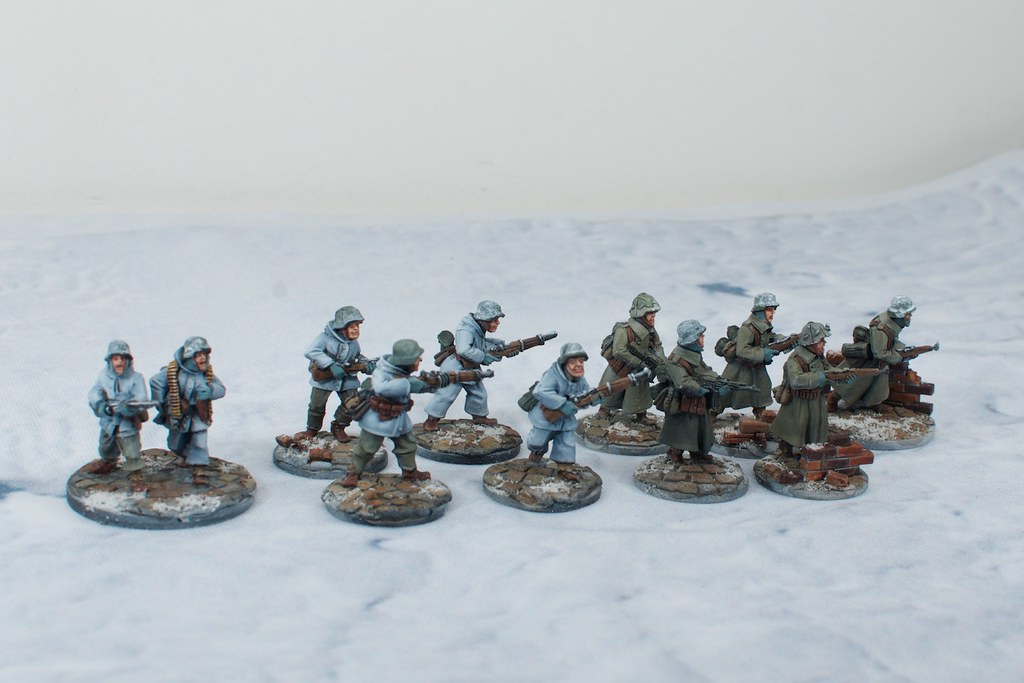 Scale-wise Artizan is rather close to Warlord. Sculpting style is different, but if you're not bothered by that they bring good variety to the force. 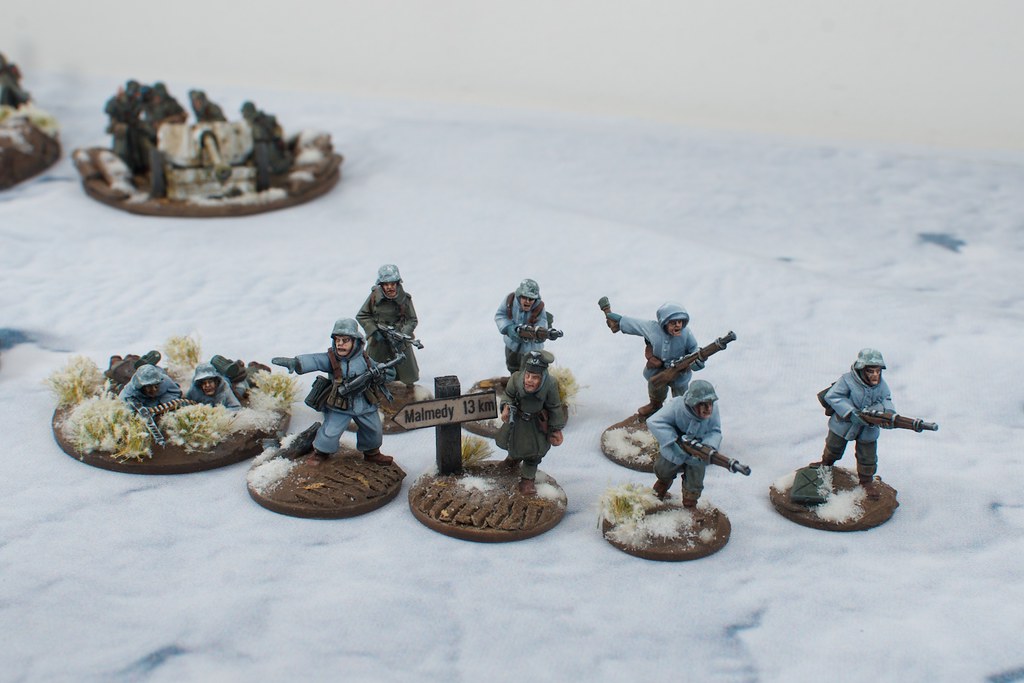 For basing, I went with too distinct themes: muddy roads with thawing snow and cobbled town streets. 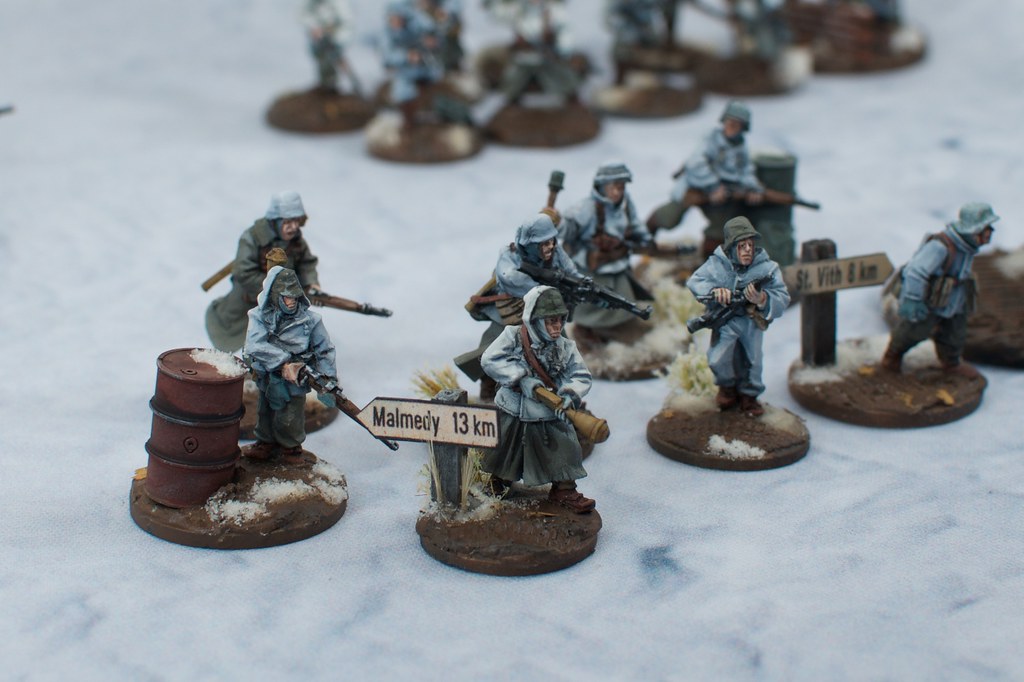 The muddy bases are done with Milliput with some tire and tank track prints pressed onto, finished with "Damp earth" enamel from Ammo Mig. For the Ardennes theme, I added the iconic "Malmedy" and "St. Vith" road signs. The signs are print outs from photographs, which I perpective corrected in Photoshop.

The cobbled bases are done with Greenstuff World's roller on Milliput. The regular "red" Milliput works wonders for cobbles as it leaves that slightly gritty, stone like, surface.

The oil drums, jerry cans and the brickwork is from the trusty old Tamiya 1:48 kits. 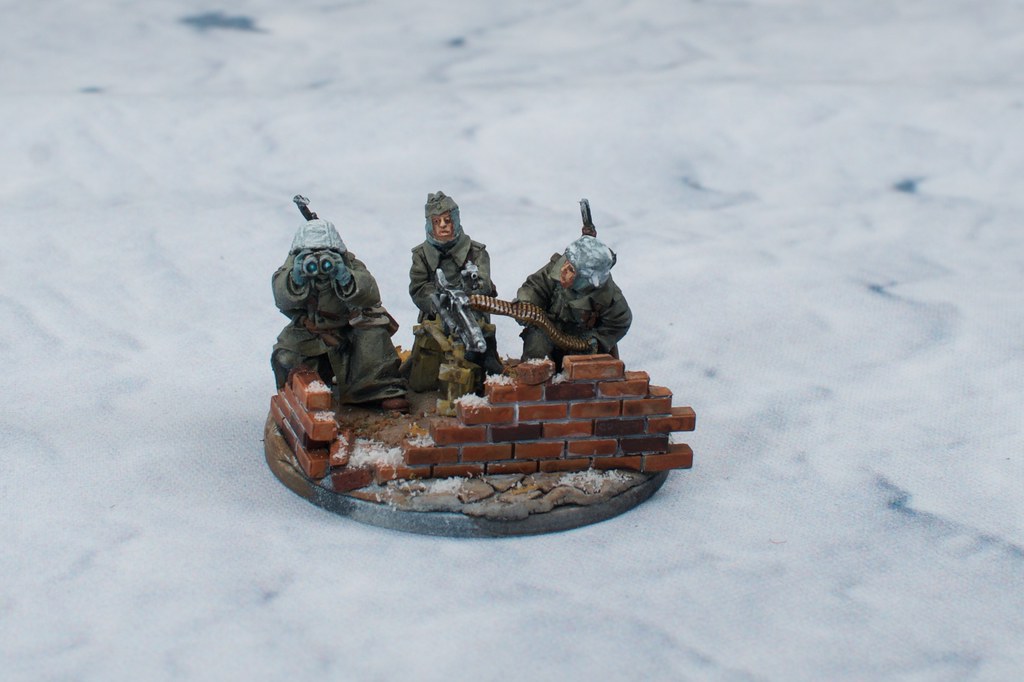 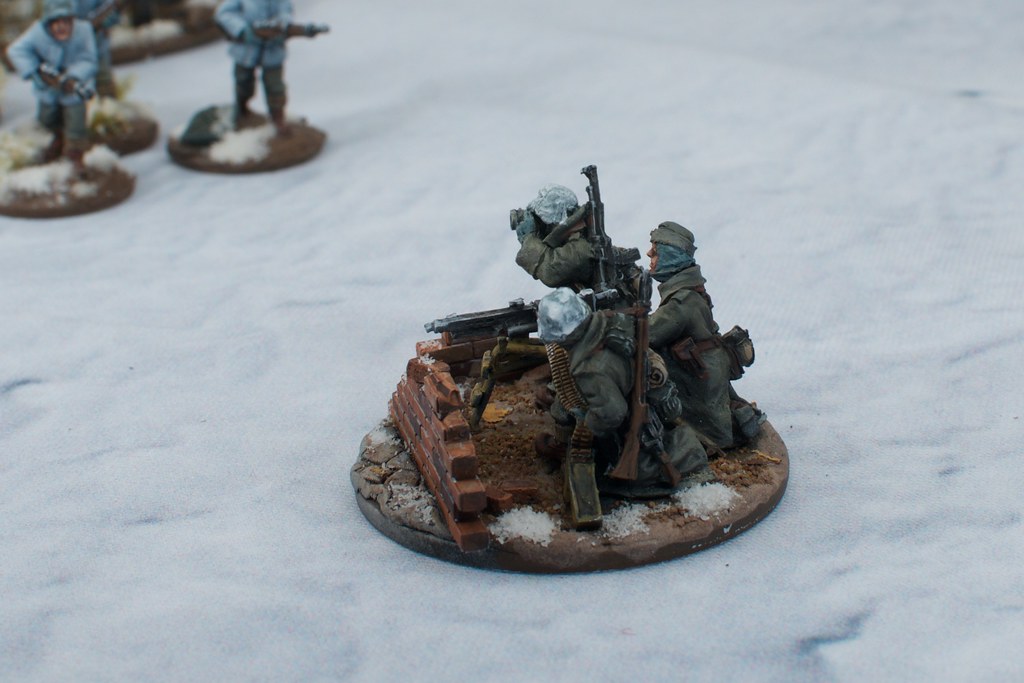 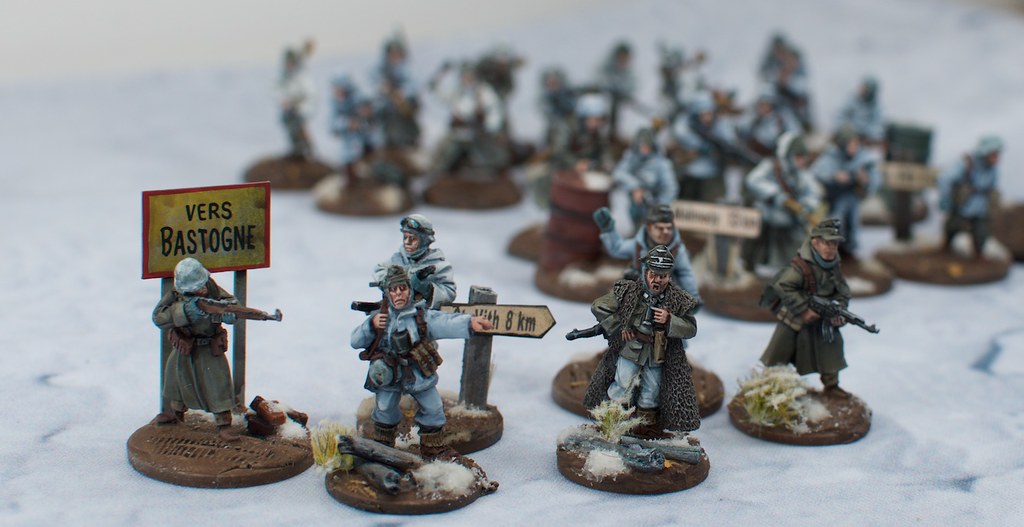 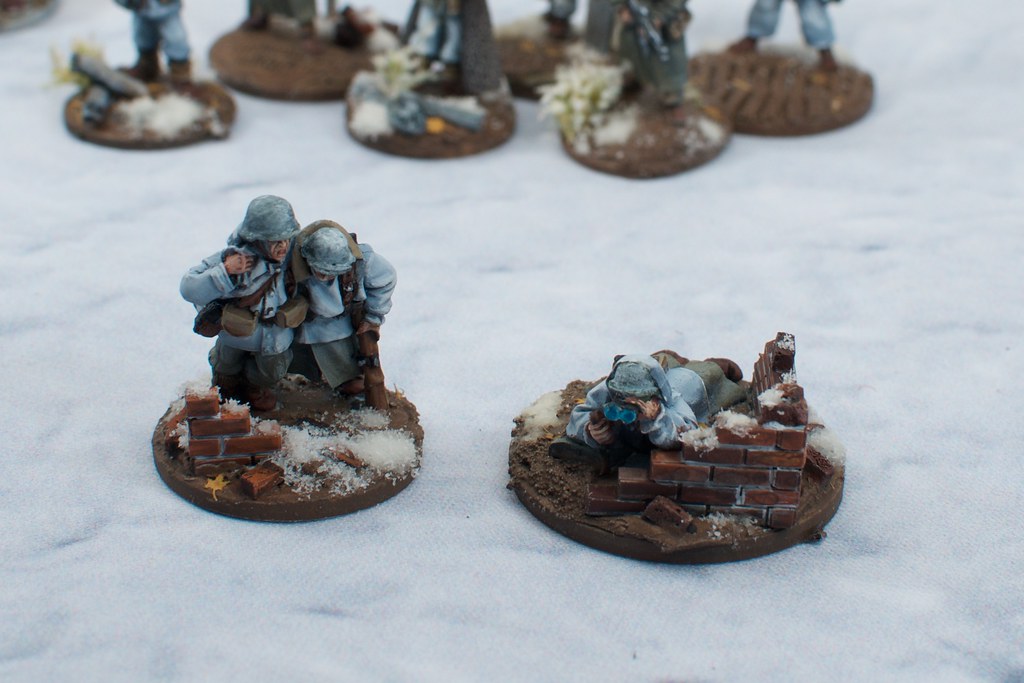 Warlord also has some ace gun crews in winter gear: 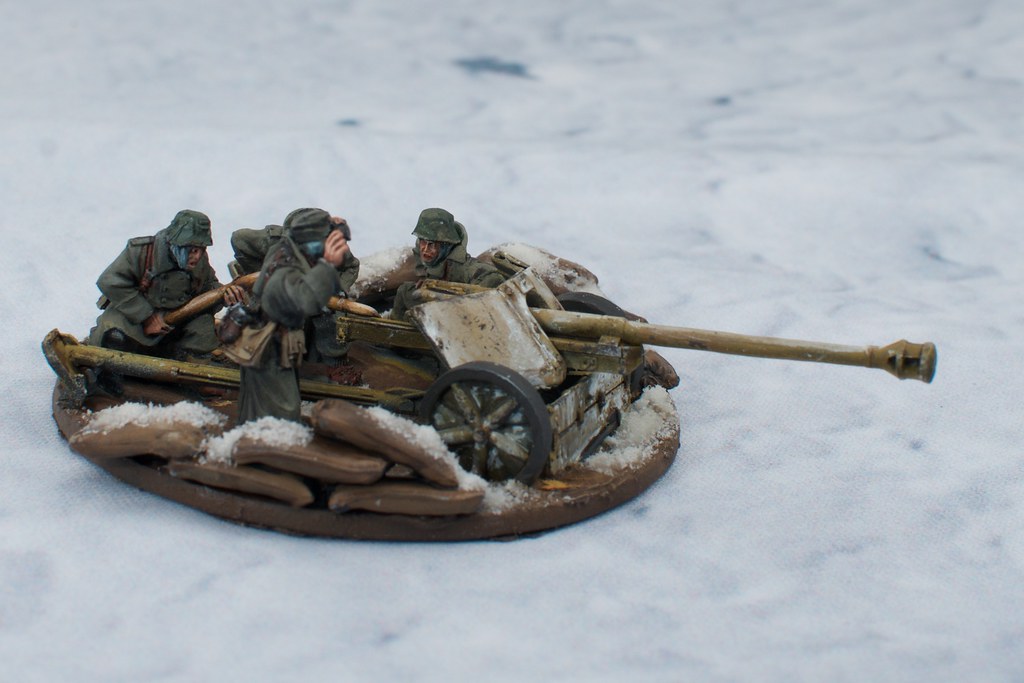 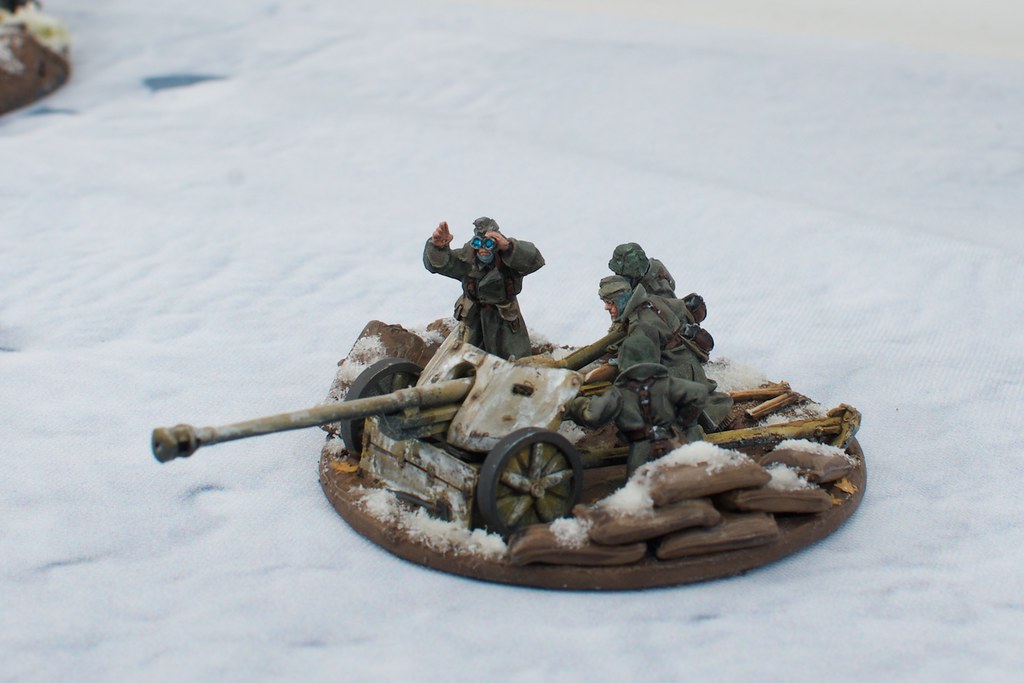 While not necessary the most suitable gaming piece for 28mm WW2 game, the leFH 18 howitzer made for a nice modelling project. 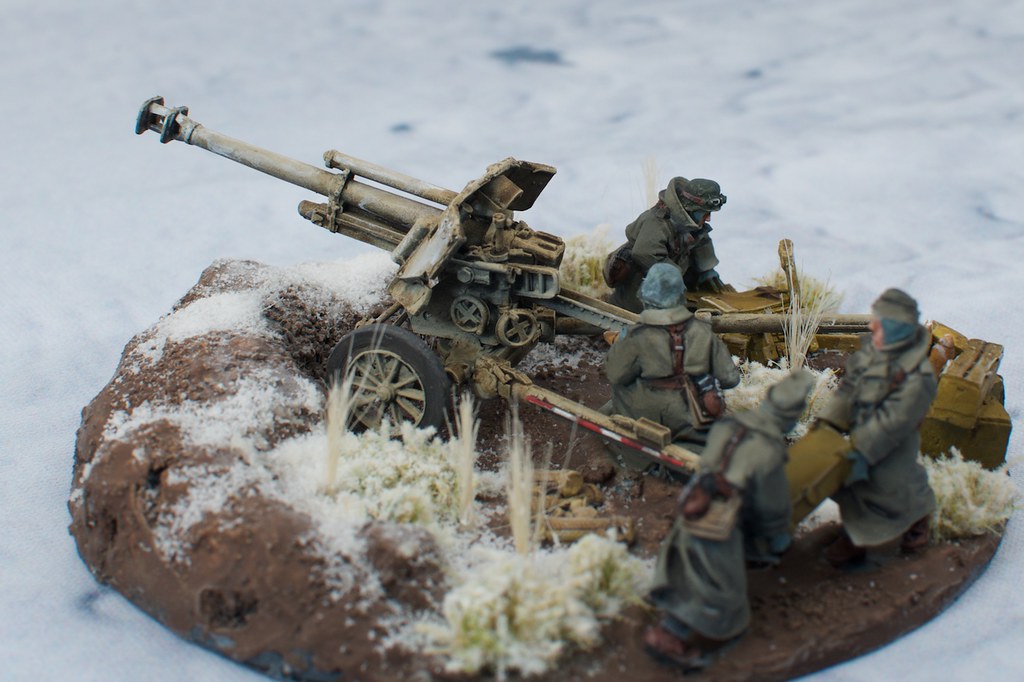 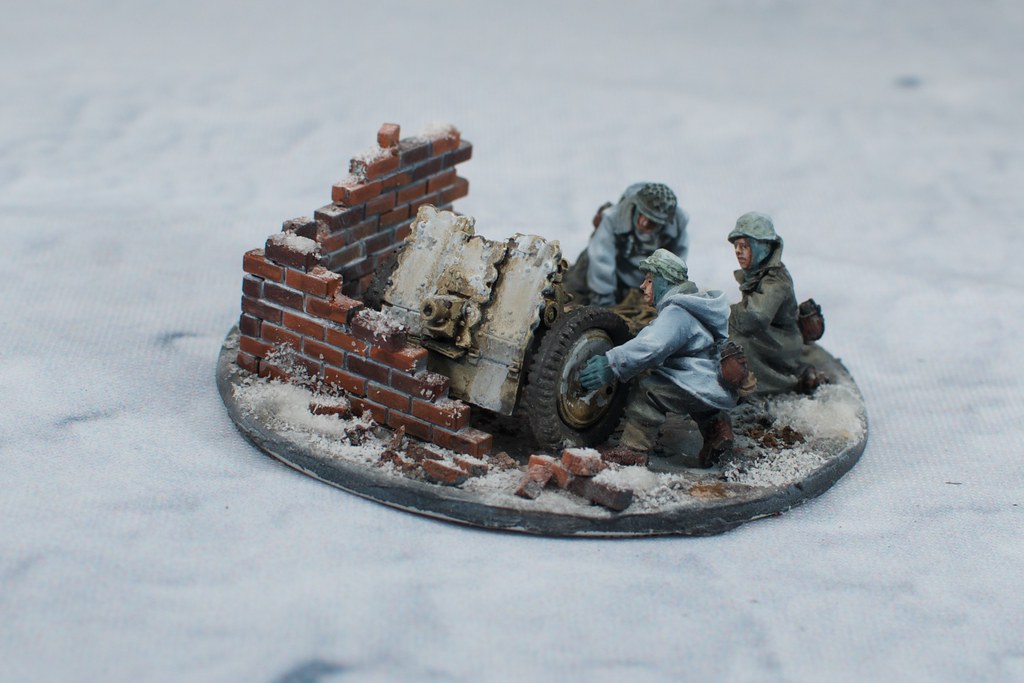 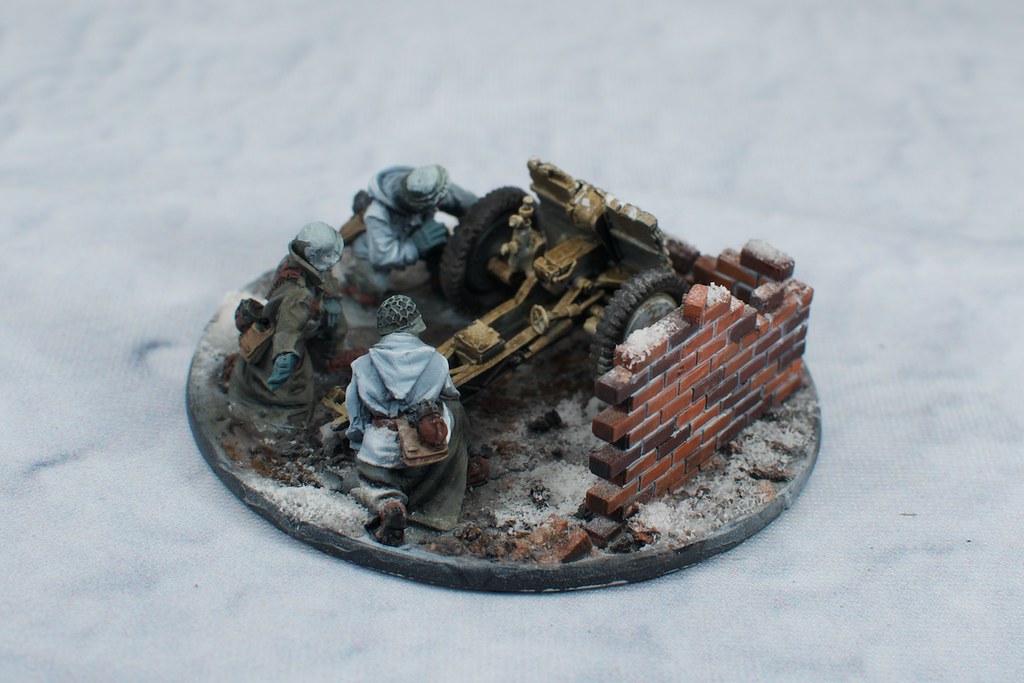 And then the obligatory group shot. The Pather on the background needs its finishing touches, hence no better photos. 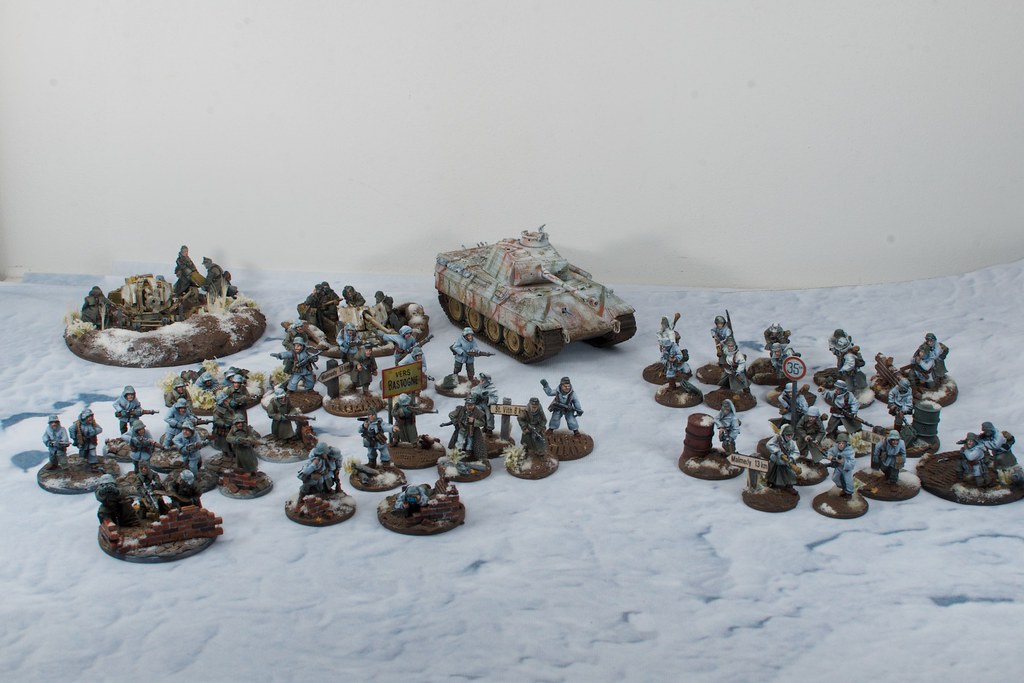 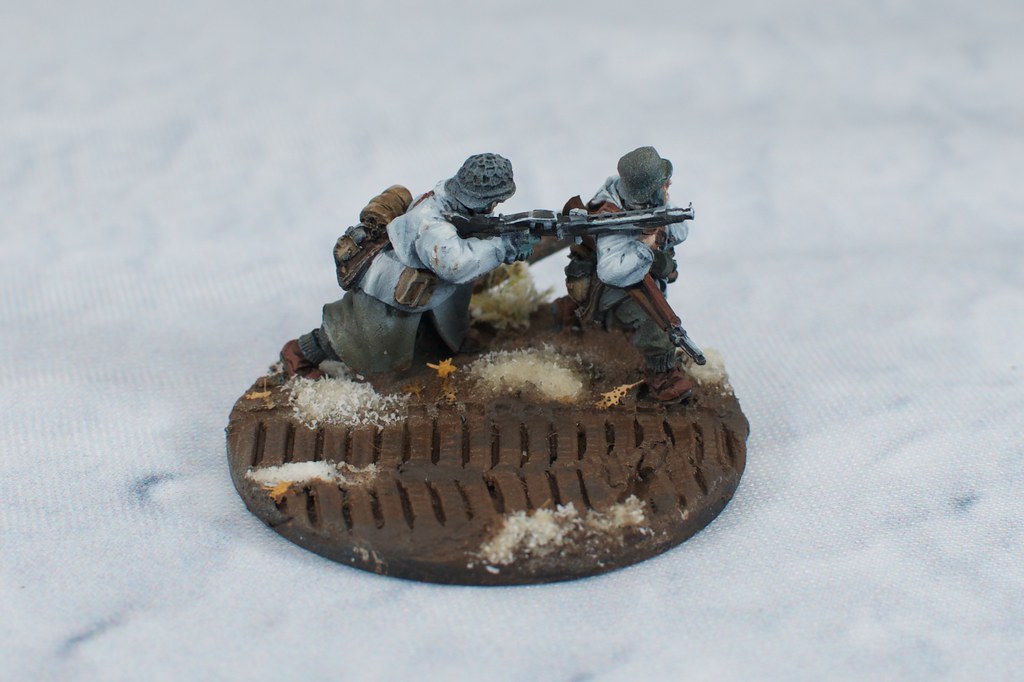 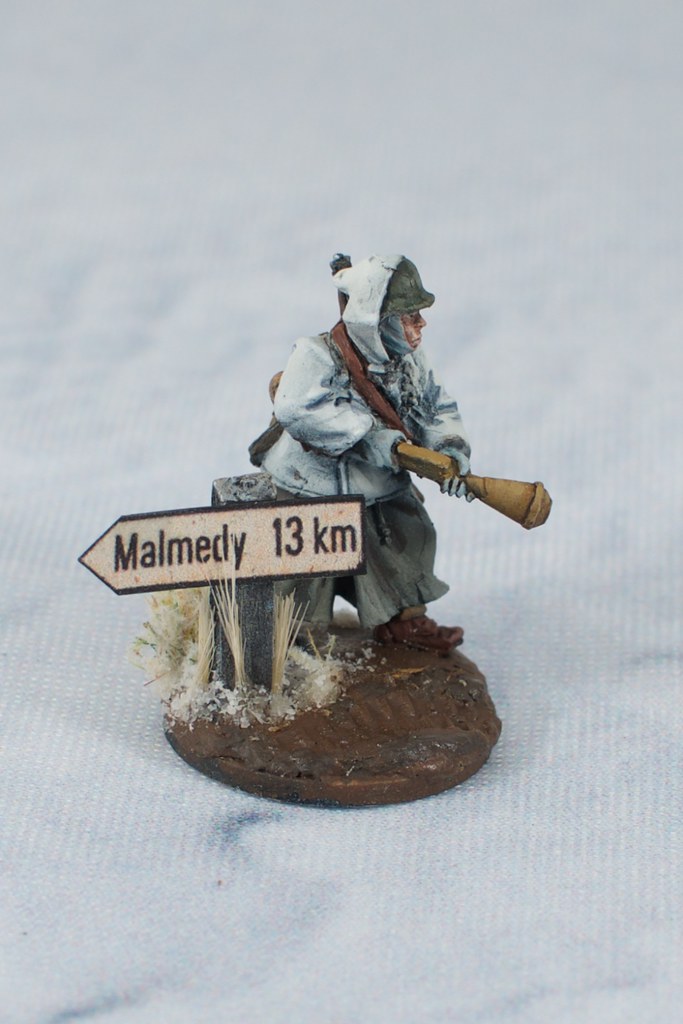 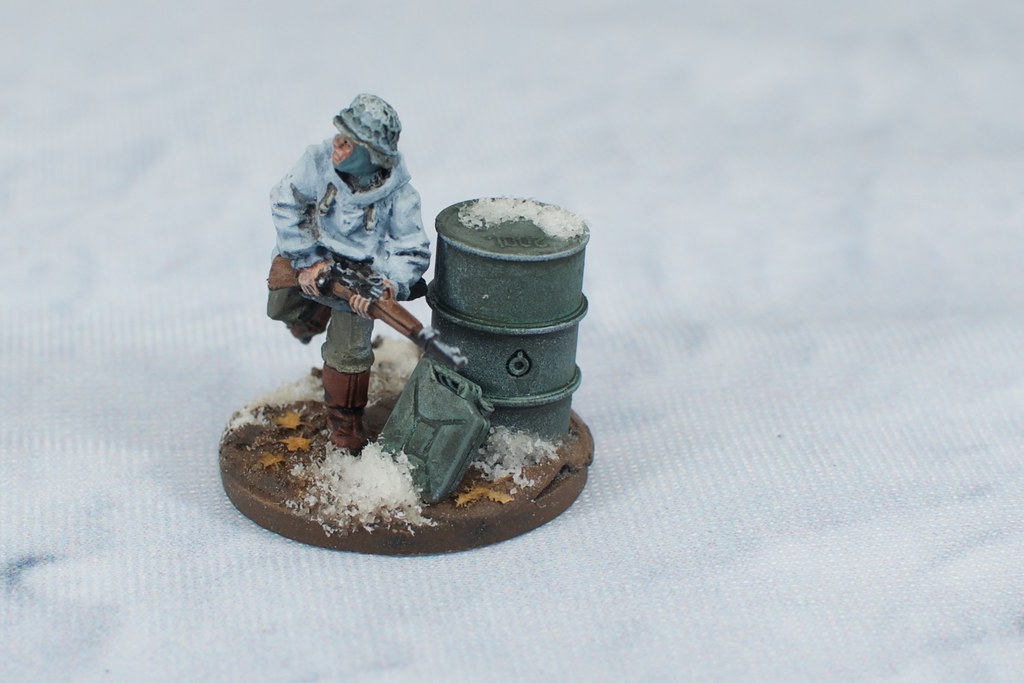 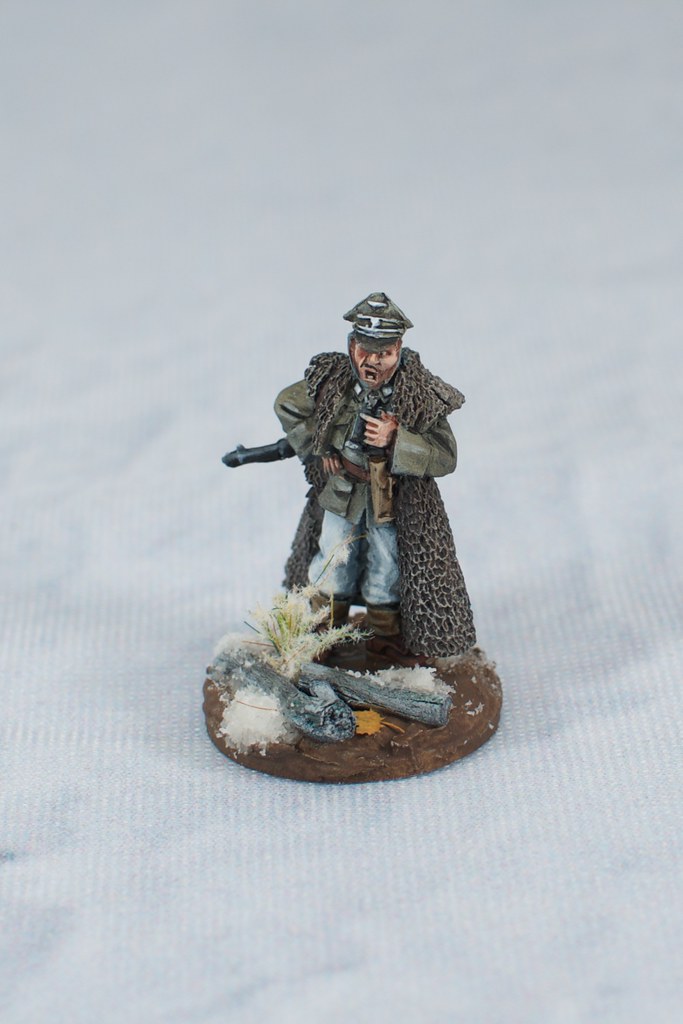 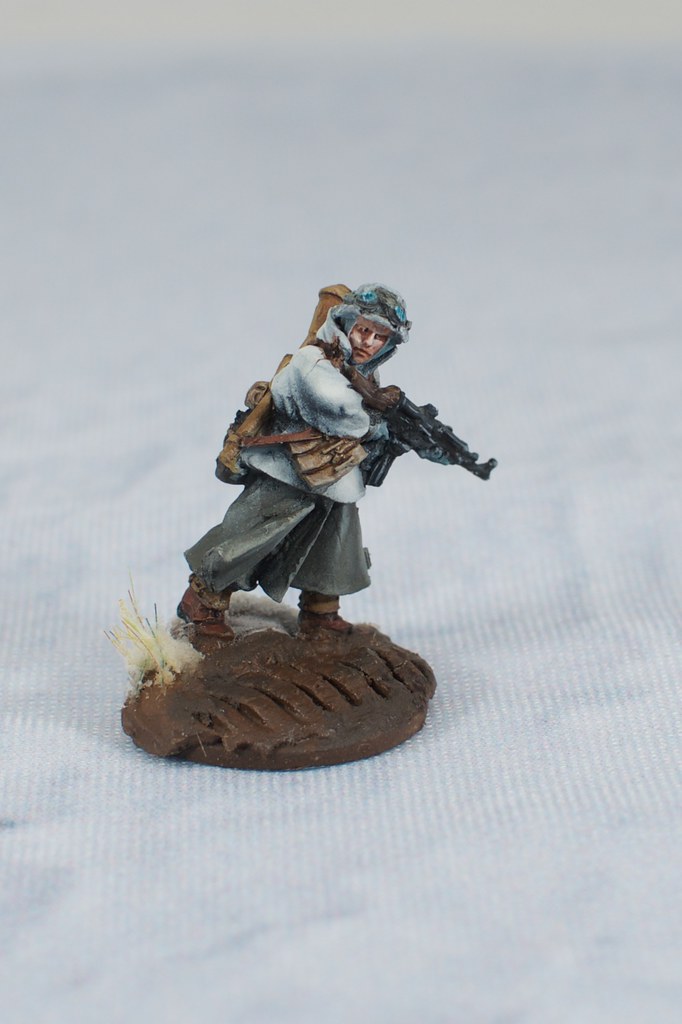 There's few odds and ends left to finish off this project, some extra weapon teams, that Panther and something heavier... While typing this, the first paint coats on my Ardennes themed buildings are drying. So until those updates, thanks for reading.