We recently played our version the Battle of Bastogne scenario from the Bolt Action Tank War supplement. The scenario pits German defenders against the US and we chose to play it with each side having an infantry platoon and an armoured platoon of three tanks.

Juha from Mentor on Miniatures took command of the Wehrmacht while I fielded my Americans.

The objective was to control the crossroads at the center of the town of Assenois. We played the game on 6' x 8' table with the town placed at the centre and the short sides acting as the players' edges.

The Germans started off with one infantry squad occupying one of the buildings by the crossroads. Half of the German force arrived to the table as a first wave while the rest was held in reserve. The US infantry platoon was deployed straight to the table and the tanks remained in reserves until turn 2. 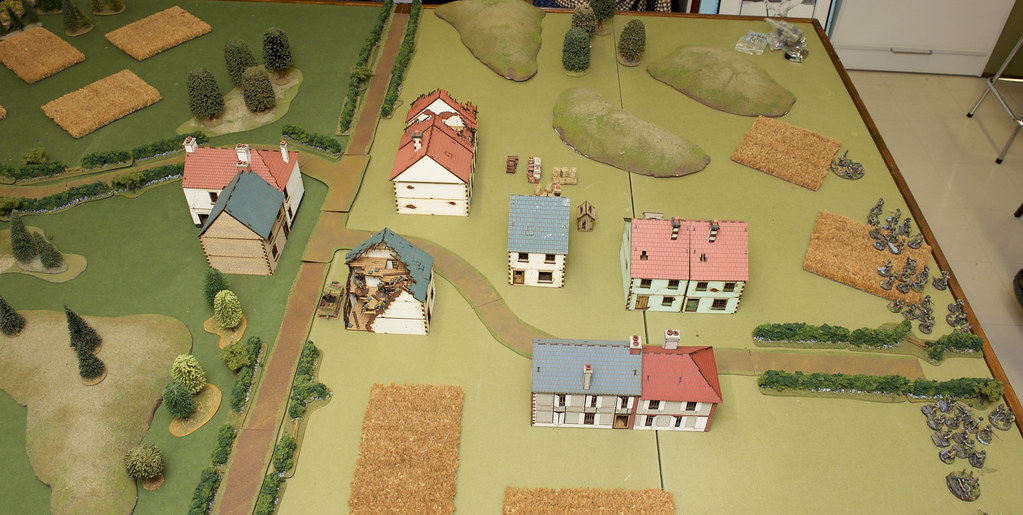 Town of Assenois, objective is the crossroads at the middle 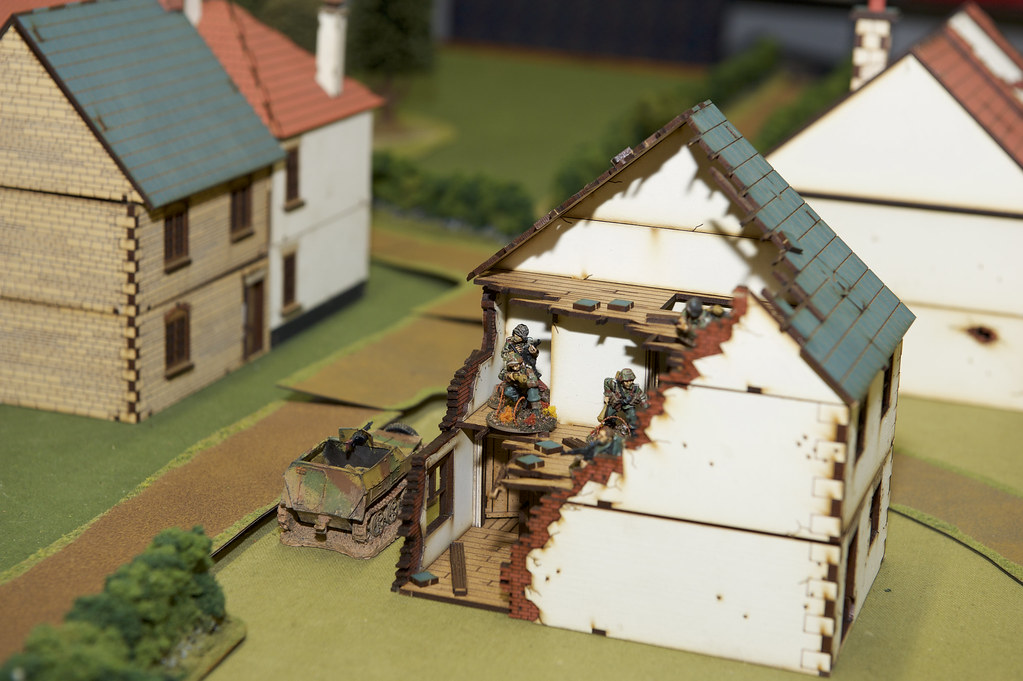 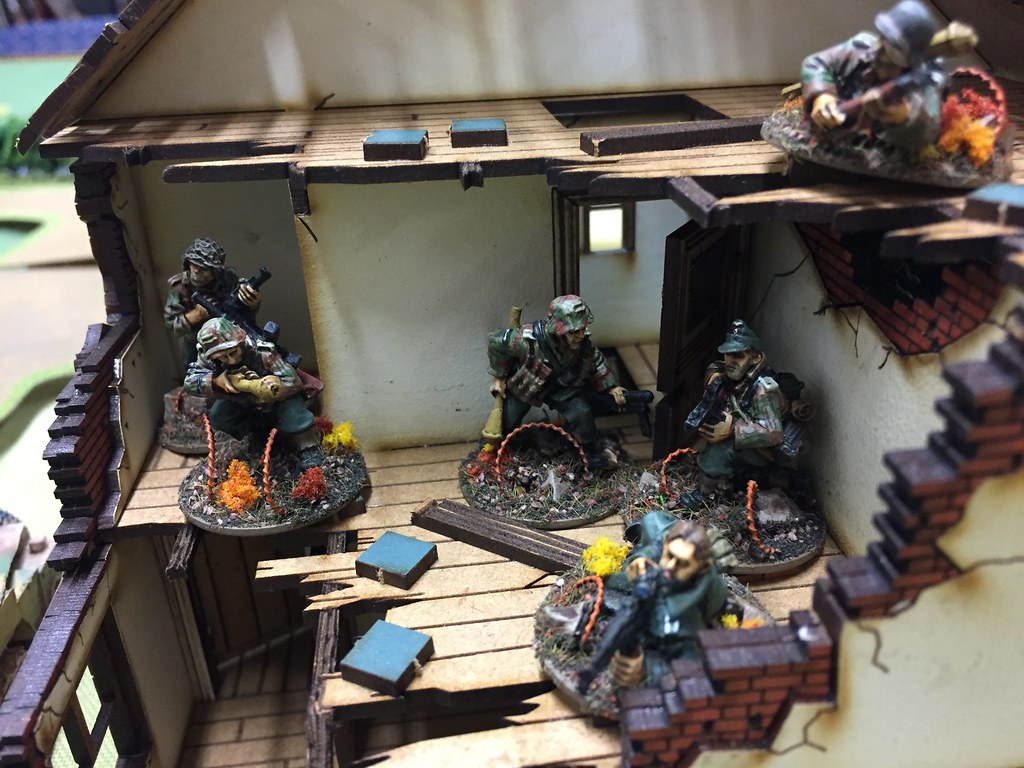 Hard-nosed Germans ready to take on the Americans 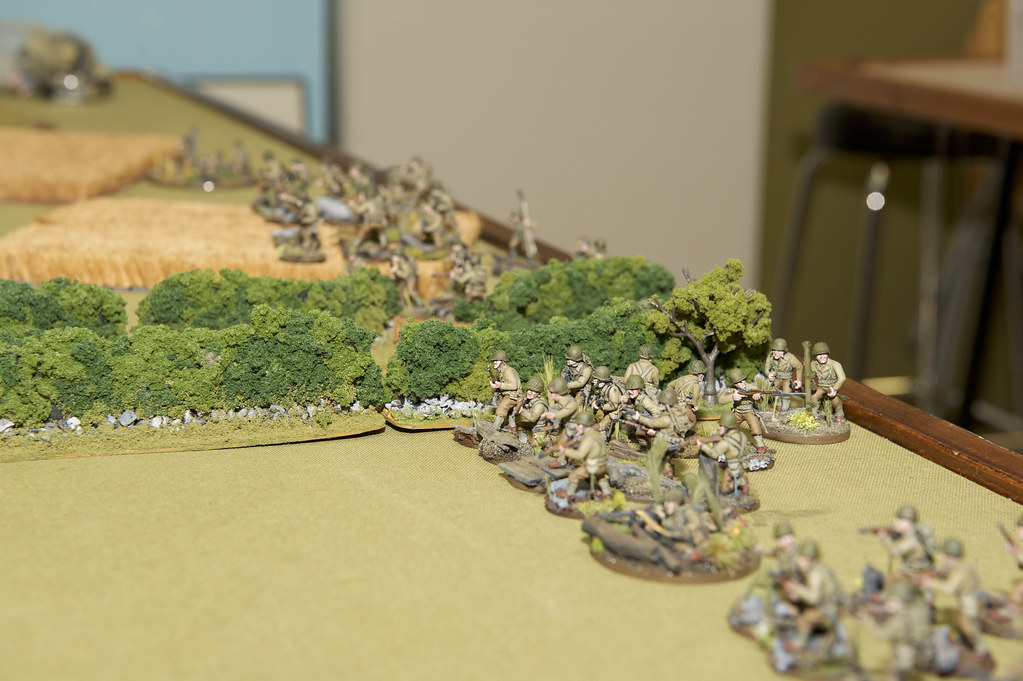 US Infantry preparing for attack 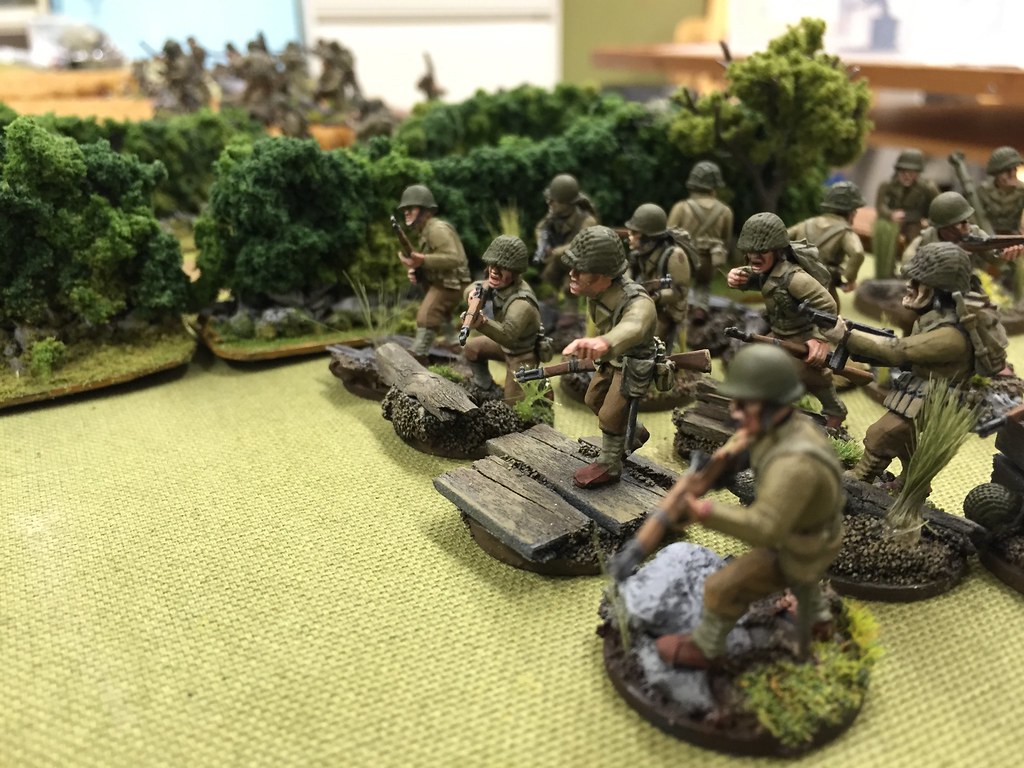 The game started with the US forces advancing towards the town and the Germans hurrying reserves to support the defence. The StuGs rumbled to the table taking cover behind the hedgerows. 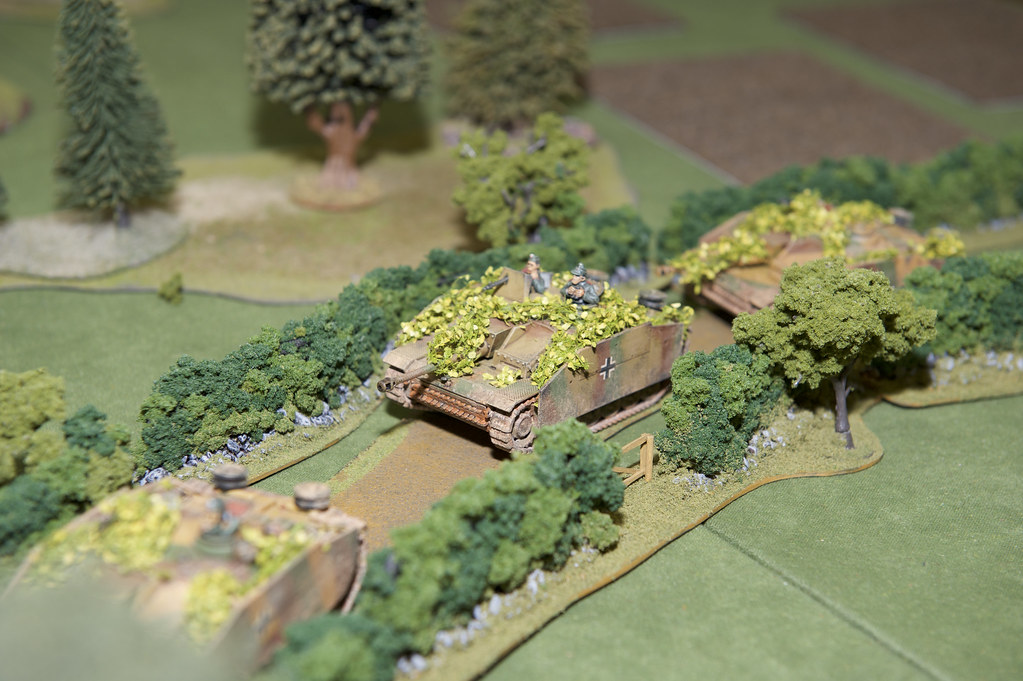 StuGs on a stroll through the Belgian country side 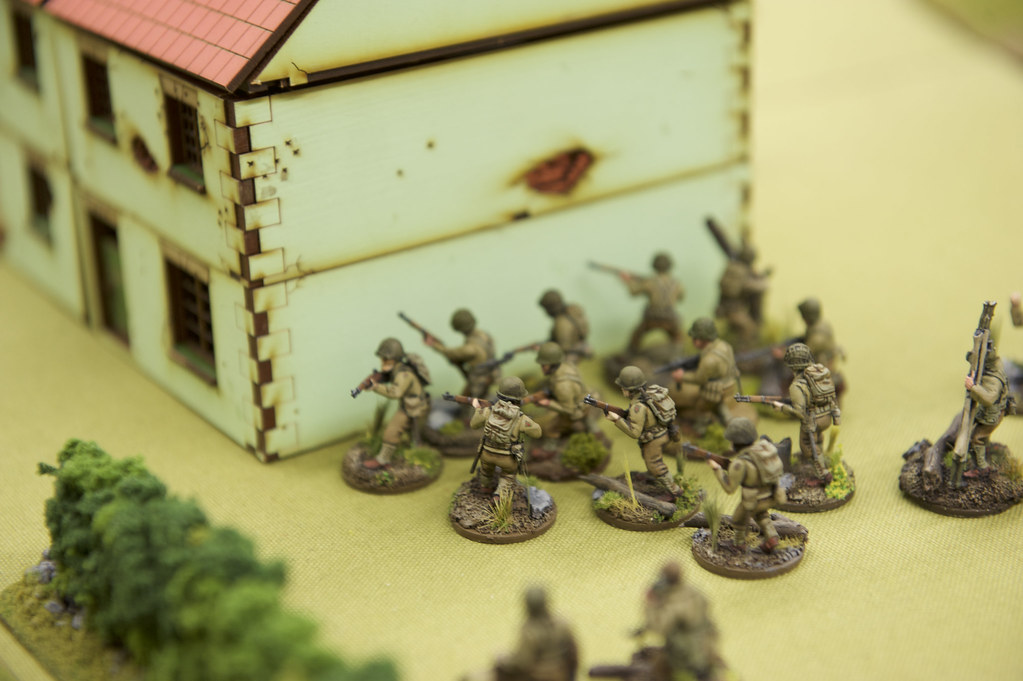 Avoiding German ambush behind the buildings 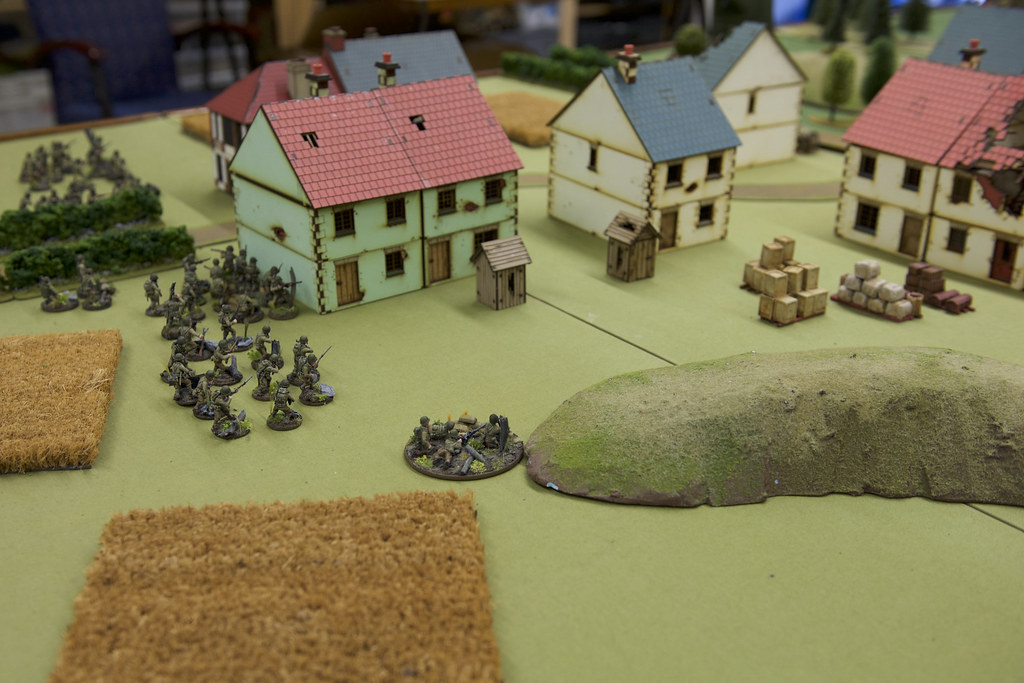 On the second turn the Shermans arrive. First one sending its regards in form of a 75mm HE to the building occupied by the German recon team, causing heavy pinning. The infantry followed suit with rifles and machine guns, piling up the pin markers on Germans. 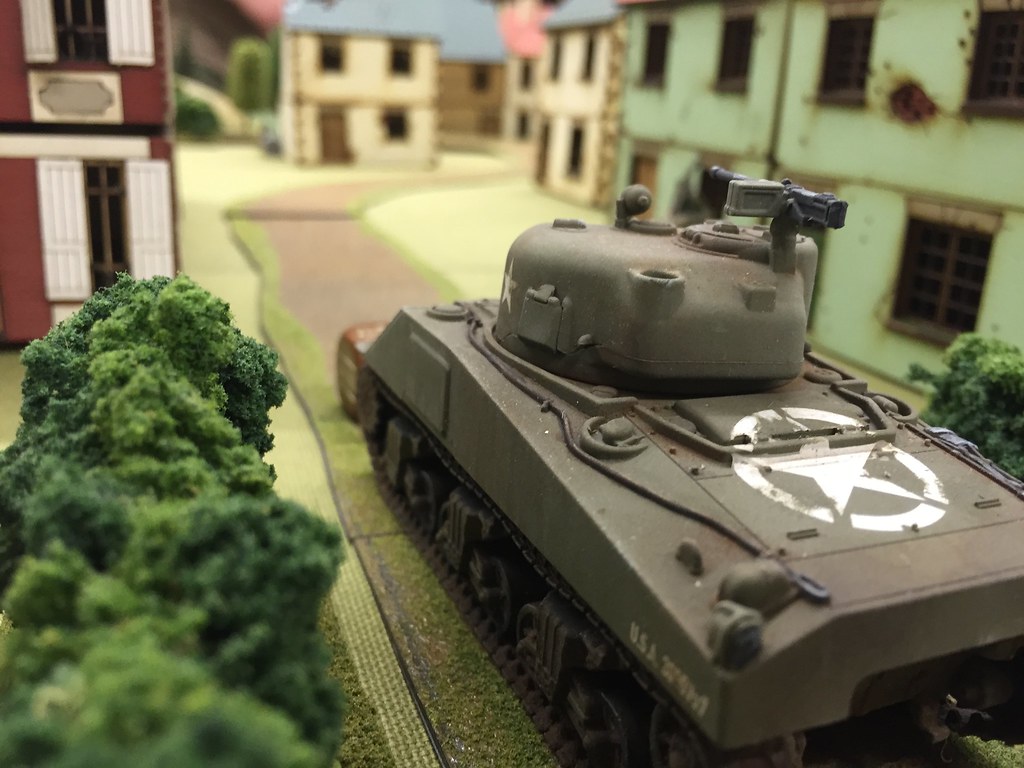 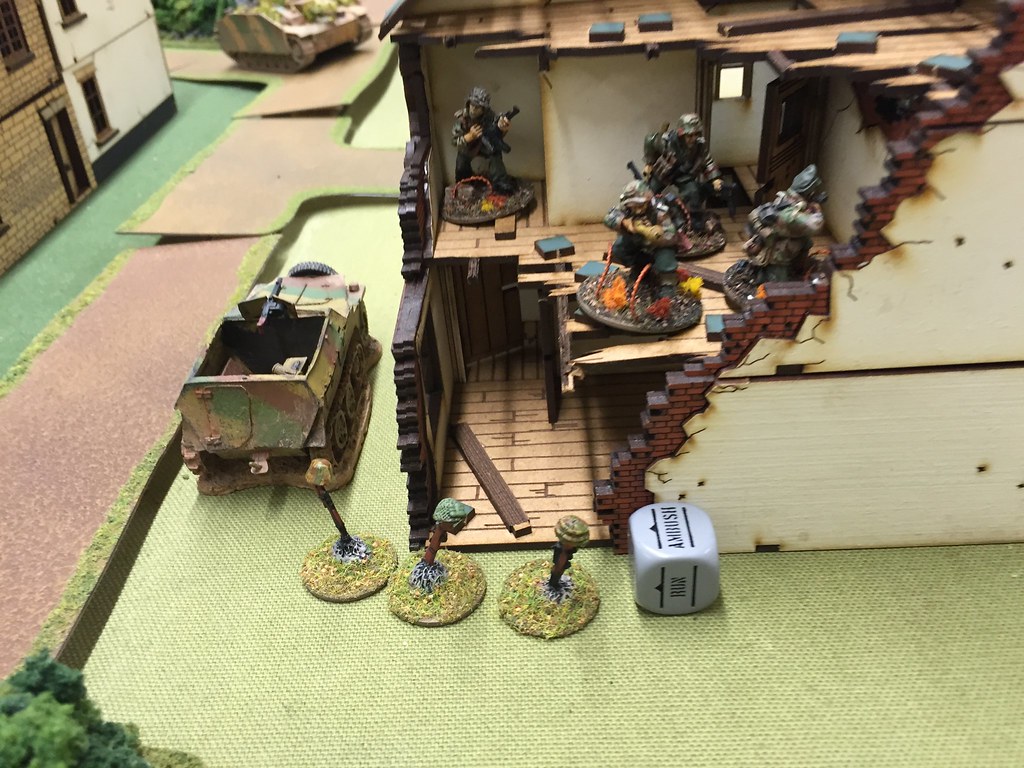 And pin markers pile on

An M4A3 arrived to the American right flank and got one of the StuGs to the sights of its 76mm gun. Lucky sixes were rolled and the target was destroyed. 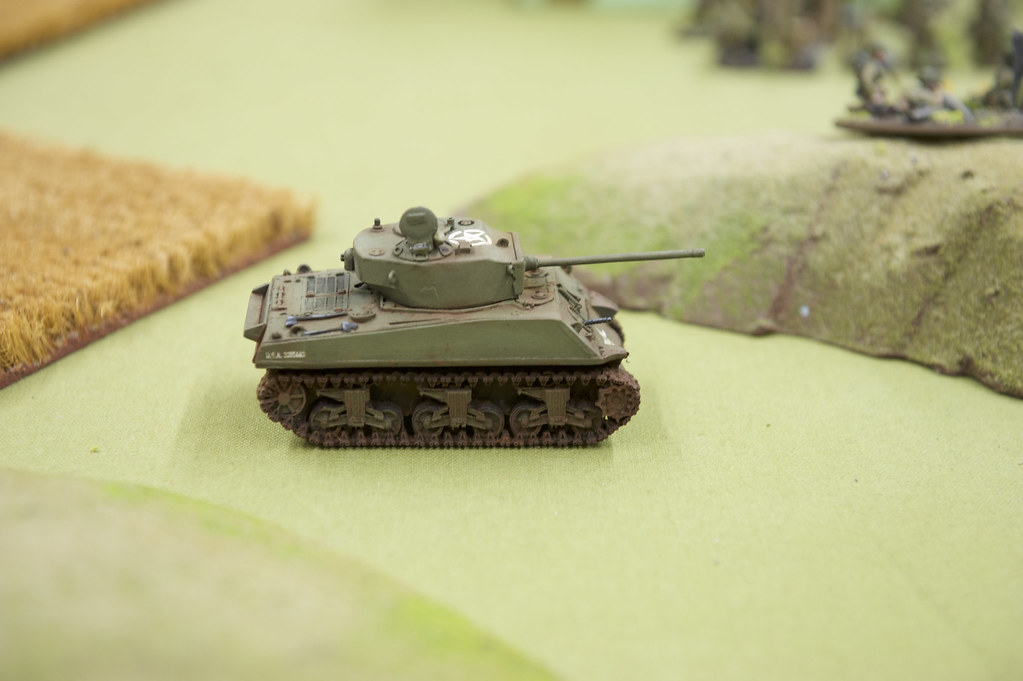 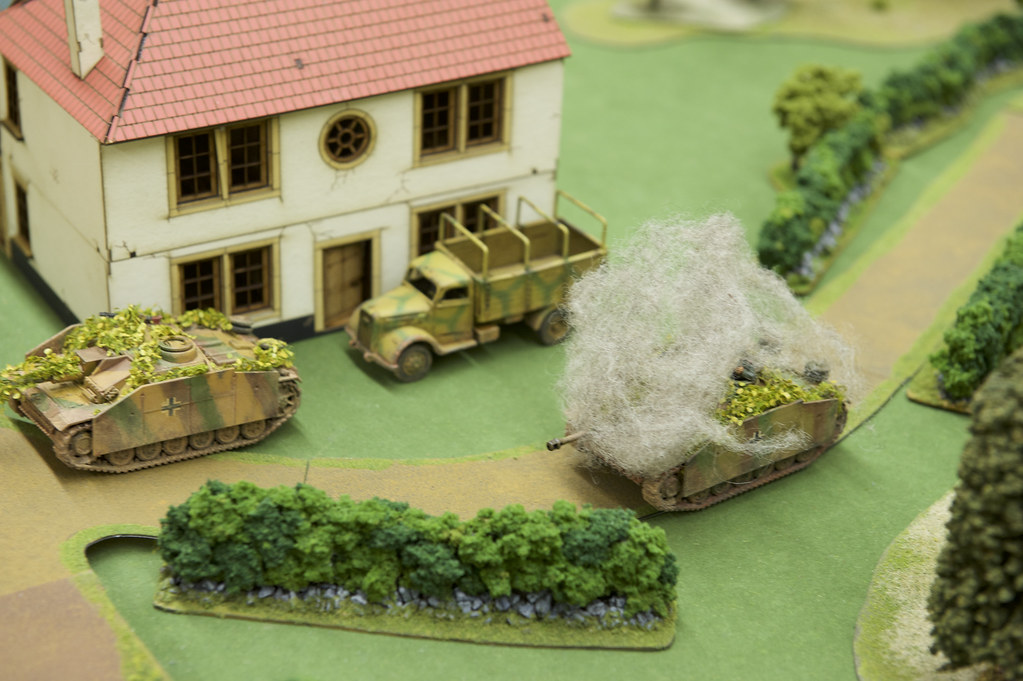 The Germans bolstered the defense as the half-track filled with Fallschirmjäger advanced to the town. 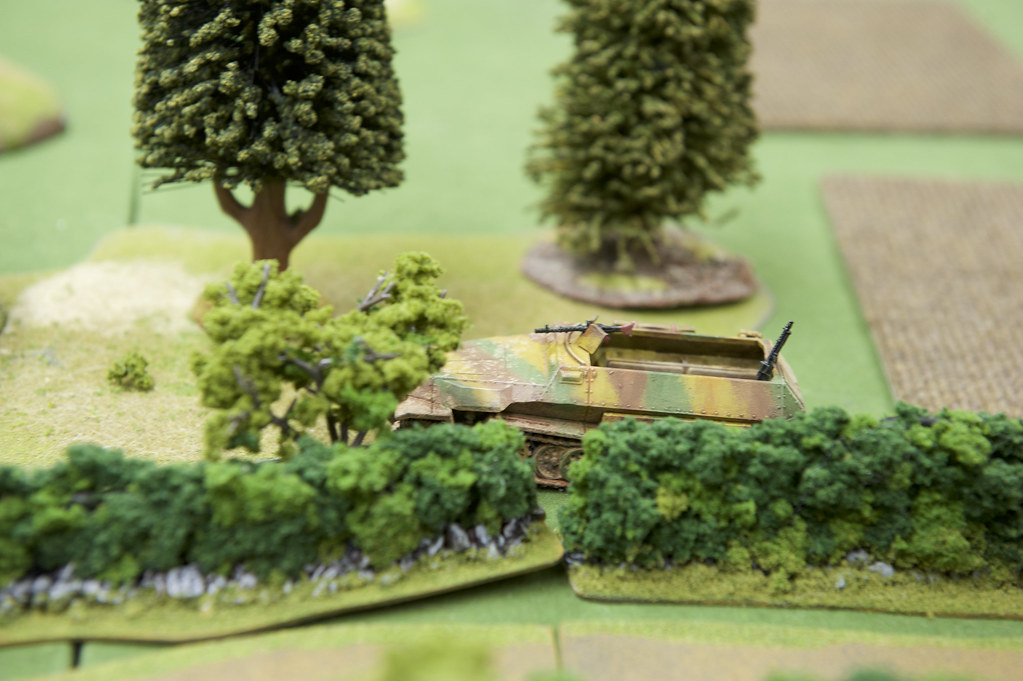 With the ambushing squad heavily pinned, the US squads advanced and poured on more lead. 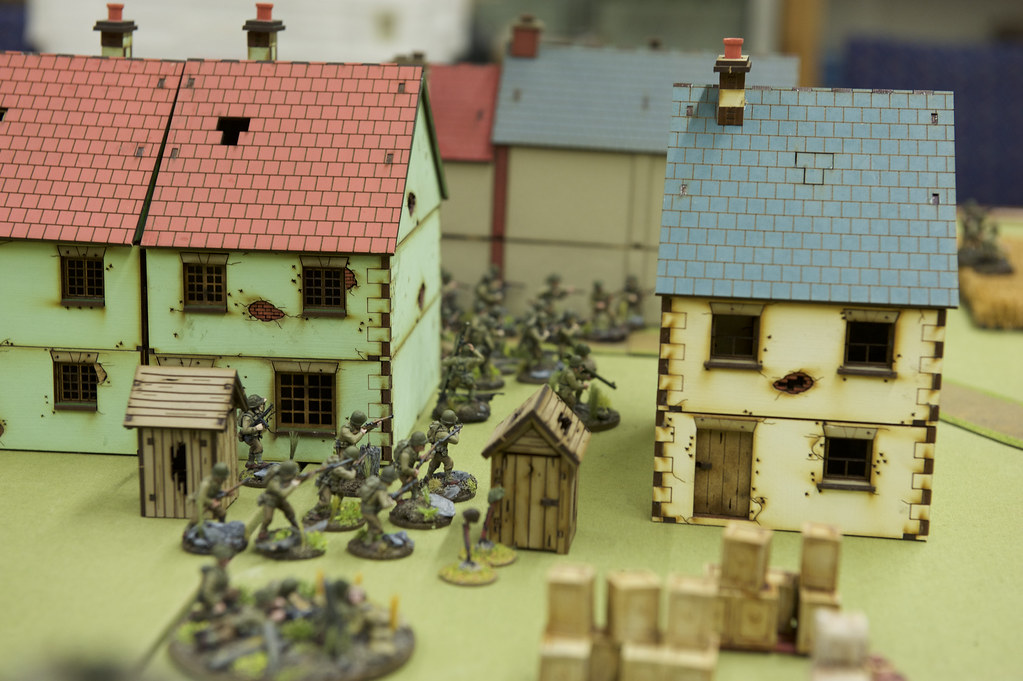 The GIs kept advancing to the objective.

Howitzer armed StuG snuck around the corner and blasted at the americans. Arms, legs and pin markers flying everywhere! 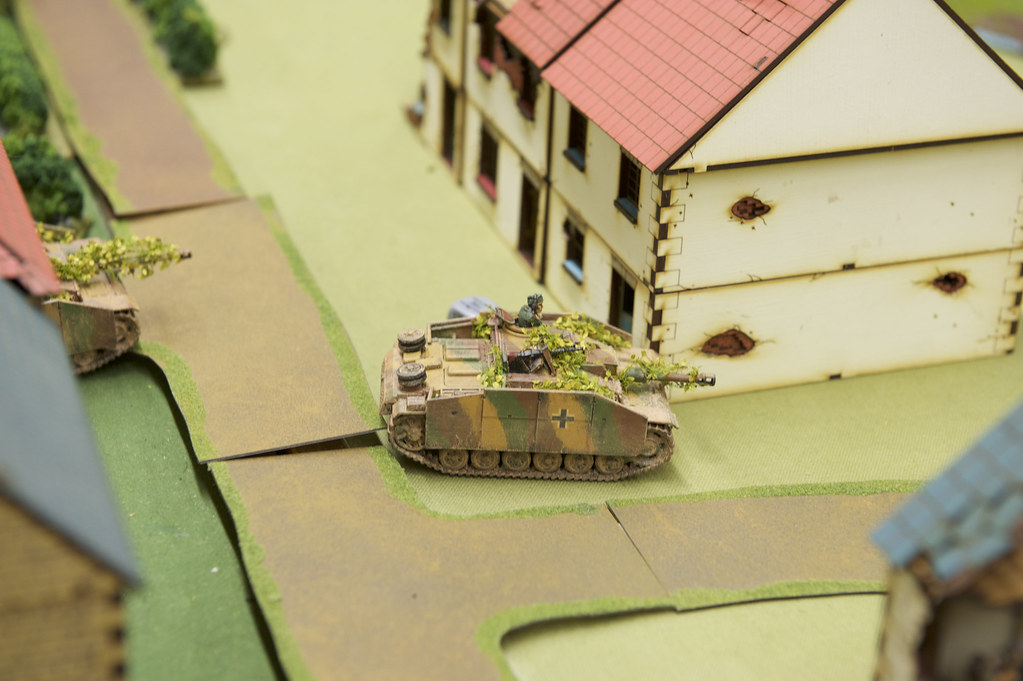 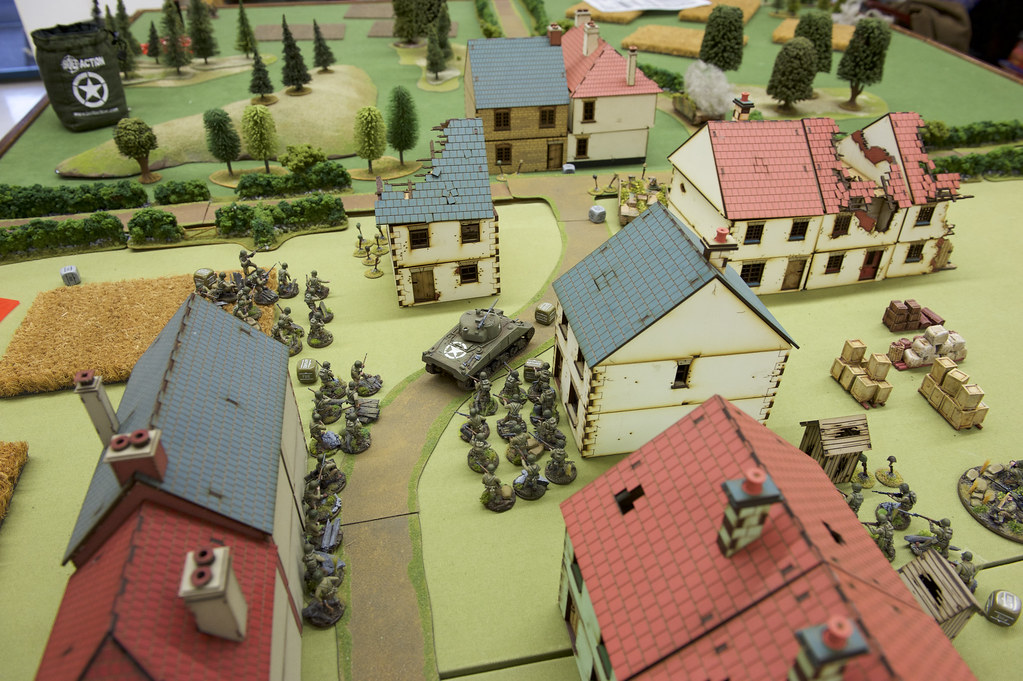 The Fallschirmjäger exited their transport and got ready to strike the American right flank, supported by armour and an AT team. 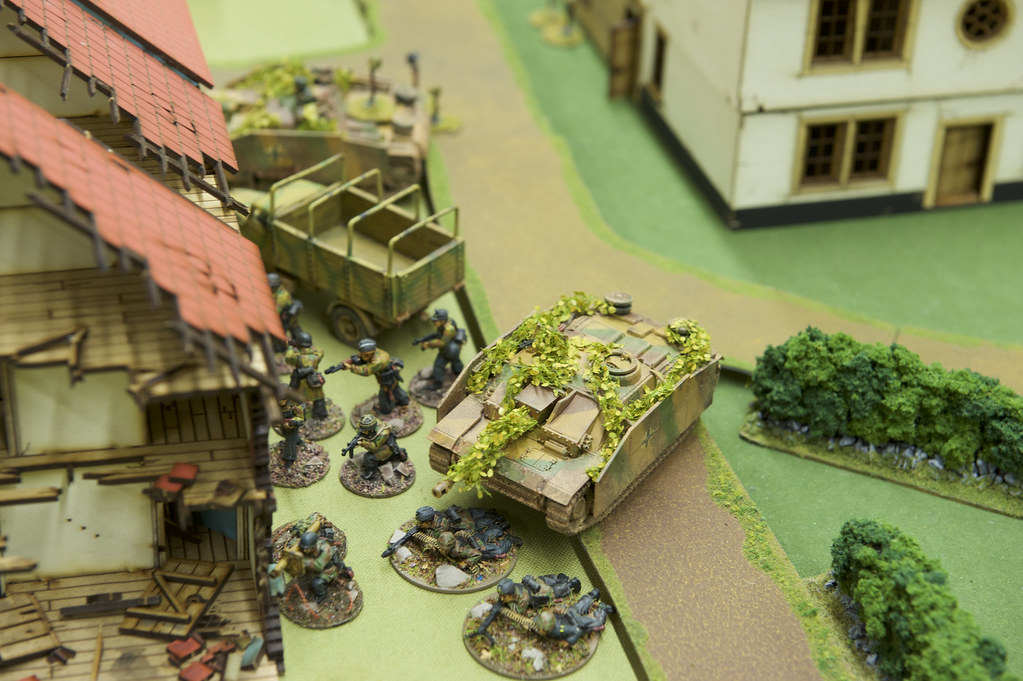 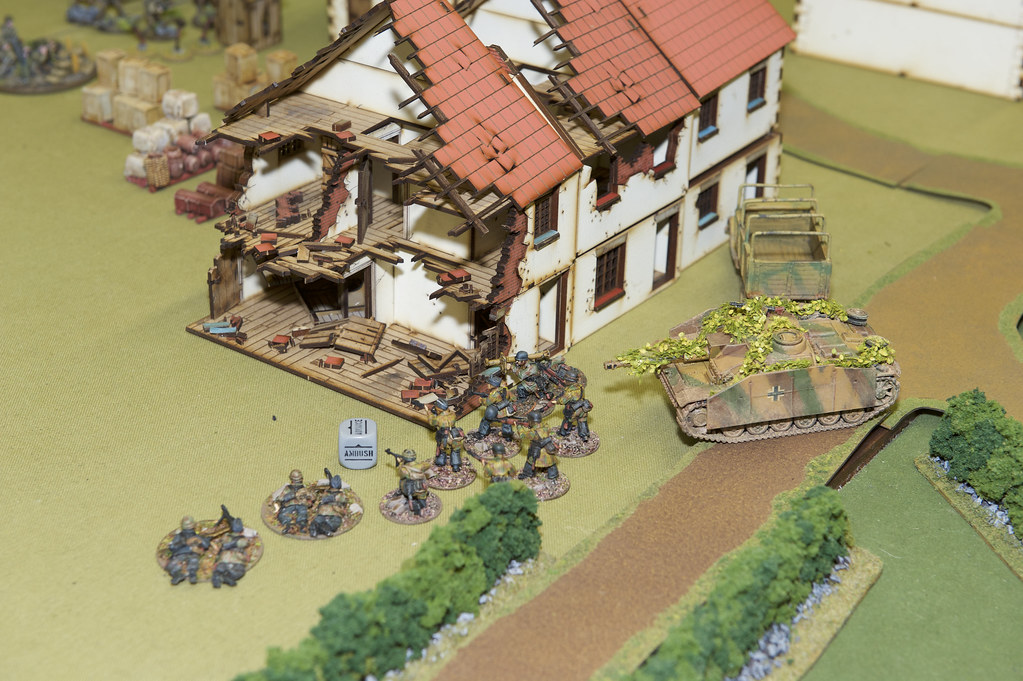 The panzerschreck team finally avenged the StuG as it took down the Sherman. 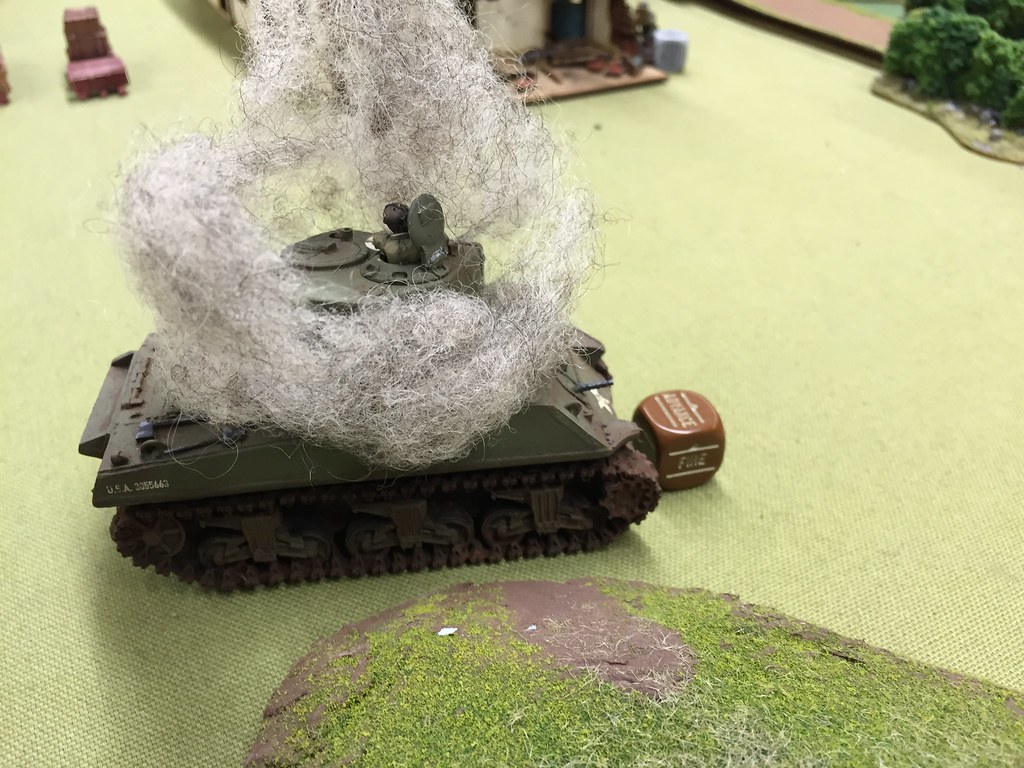 Finally the US firepower was too much for the recon team and they broke. One of the infantry squads assualted the building occupied by the German machine gunners outnumbering them and taking tighter hold on the objective. Bloody rounds of close combat ensued on the third building at the crossroads. Finally a heroic Leutnant (surely going for the Iron Cross) chasing the American assailants off. His heroism was in vain thoughm as the crossroads eventually fell to the US. 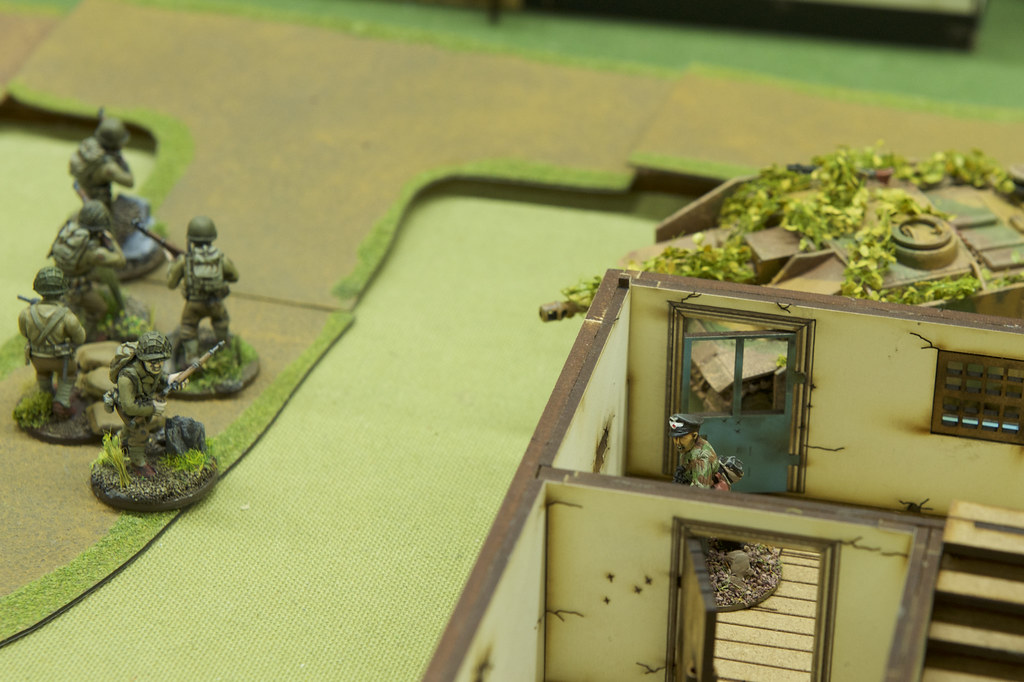 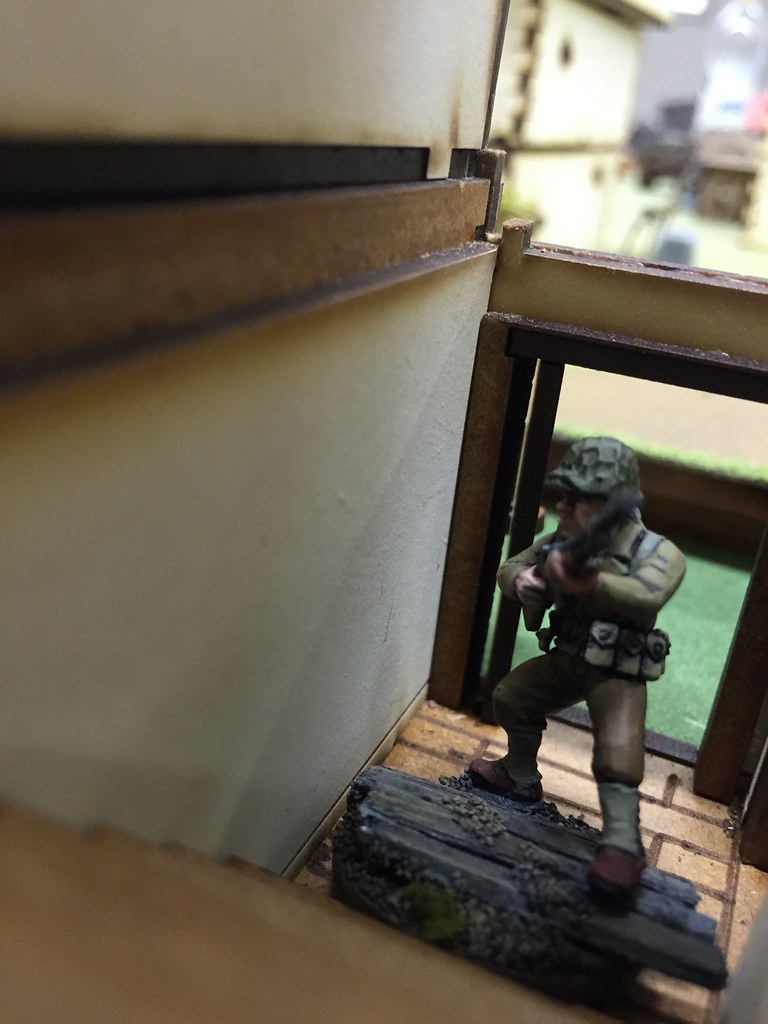 BAR Gunner assaulting the MG team on the building

Superbly enjoyable game with great minies and terrain! Bolt Action lends itself well for a game on a larger table and combination of infantry and armoured platoons game this game that extra character. The same scenario would also work with bigger forces and could be tried with two players a side, other one commanding the infantry and the other the tanks.

Thanks for reading, until next time.